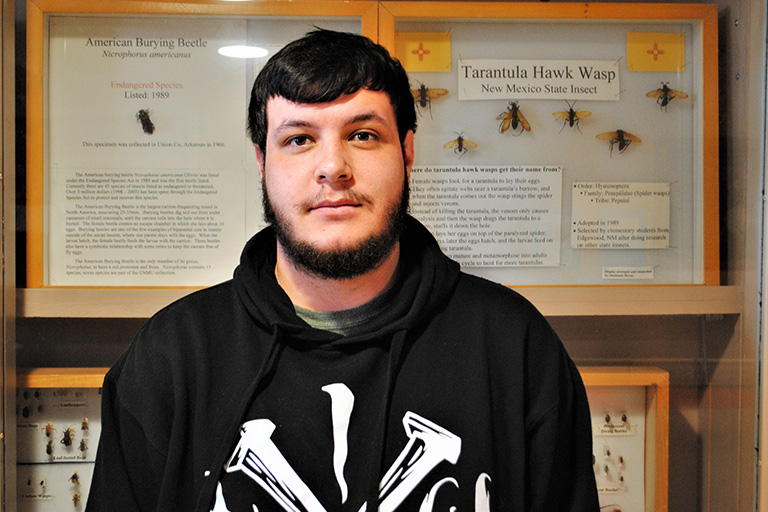 Michael says the professors have helped him acquire an "immense amount of volunteering opportunities and experience.

"Dr. Mali is the advisor of the ENMU Fish and Wildlife Club and pushes us to get involved and to apply for internships," he explains. "Dr. Filbrun is a professor that goes above and beyond for his students and mentees in order to get them the real hands-on experience of field work."

Michael volunteered for the Dragonfly Festival at Bitter Lake National Wildlife Refuge near Roswell, New Mexico, where he and his fellow volunteers taught the general public about wildlife. They also taught children how to fish and shoot bows. Michael was also given the opportunity to speak with people who work in the New Mexico Department of Game and Fish.

He also volunteered for a plenary session at the 52nd Joint Annual Meeting of the Arizona/New Mexico Chapters of the Wildlife Society.

"Dr. Filbrun has given me many opportunities for getting some hands-on experience in the field via electrofishing, gill netting and the opportunity to volunteer at the Mora National Fish Hatchery," Michael says of his favorite class, "Fisheries Management," taught by Dr. Filbrun.

The six-time Dean's List honoree, who expects to graduate in spring 2020, has a minor in criminal justice. "Growing up, I was really interested in policing, but I had a love for animals and wildlife," Michael explains. "I decided I would pursue a career in the Department of Game and Fish as a game warden or a park ranger in order to satisfy both of my interests.

"Ultimately, my endgame is to work at Yellowstone National Park," he adds.

Working as a wildlife major can be both challenging and simultaneously rewarding. "As wildlife majors, we take a lot of notes, and it requires a lot of memorization," Michael says. "I would advise students to study hard and early to avoid falling behind."

The resident of Clovis, New Mexico chose to attend Eastern due to its size. "ENMU has smaller classes. I've found this to be a benefit because professors are more engaged with their students," he says. "It was also close to home, and it's very affordable."

Michael shares that the best part of being a Greyhound is the community: "Everyone is very helpful and kind."

His favorite place on campus is the Golden Student Success Center, where he goes to study and relax with his friends.

Michael's hobbies include fishing, soccer, gaming, exploring and hiking. He has one brother and one sister.