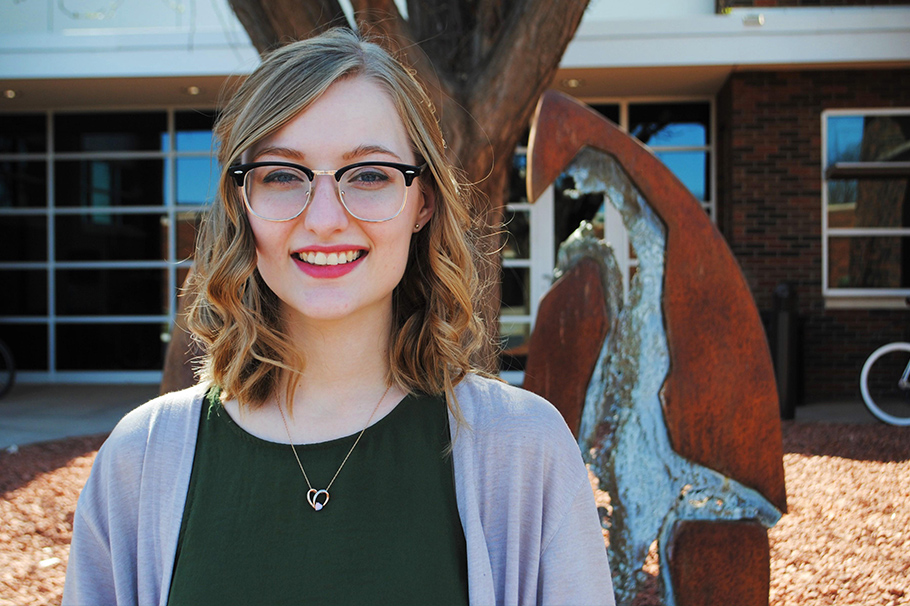 Kathy decided on her graphic design major when she came to college. "I wanted to have a creative outlet, to help businesses succeed and to be in a field that was always changing," she says. "I imagined a career that changes projects regularly and refuses to stay stagnant would be very enjoyable work."

The Greyhound chose to study marketing when she was in her sophomore year because she wanted to understand how to sell products through her graphic designs. "I became interested in how businesses operate and wanted to learn more on how to effectively market products," she added.

Kathy, who is expecting to graduate in the spring of 2020, has not decided on a career path yet. She does, however, have an idea of what she wants to accomplish in a career: "I want to be in a leadership position. I could see myself becoming a lead graphic designer, a social media marketer or a creative director."

She says she will go wherever the future may take her, explaining, "Above all else, I want to be happy with my career and enjoy the work I do. Life is too short to work in a job that you aren't in love with. I want to work with people and help businesses succeed. I want to brainstorm ways to achieve marketing goals, to create and enjoy this process for several years to come."

Jessica Gerlach and Scott Golem, assistant professors of art (graphic design), have had a "significant impact" on Kathy's learning at ENMU. "Any time I have any questions on a project, in class or out, they are the first people I go to."

The double major says she's enjoyed her typography class with Jessica Gerlach since it opened her mind to more design possibilities. "It switches your brain to a new way of thinking where type can be a thing of beauty and convey much more meaning than what is known within the word itself," she explains. "In typography, I had experimented with design in ways far different to any other class I have taken."

She chose to attend Eastern because "it's known to have a great art department, has smaller class sizes than other universities, is close to home, affordable and has many other degree programs in case you change your mind. What more could I want? I know that when I graduate from ENMU that I would have received a good education that I will look back on for the rest of my life."

Kathy, who has been on the Dean's List since fall of 2016, has a lot of good advice for Future Greyhounds: "Show up to your classes, communicate with your teachers and accept as many opportunities that come your way as possible.

"In many majors, coming to class and completing the assignments is enough to get you a degree but will not give you the experience and opportunities from networking. If you work hard and consistently give work your all, doors will open for you."

Kathy says that being intimidated to start on projects and assignments is also a big issue for many students, including herself. "In my 'Graphic Design Projects' class, we were assigned to do something—anything—for 50 days to improve our skills. The project was assigned at the beginning of the semester and is due at the end to give plenty of time for errors and days missed. Many students, including myself, were afraid to start the project because it seemed so daunting. As I progressed through the assignment, I realized that starting the project was far more intimidating than experiencing it and following it to completion."

She works as the lead graphic artist for the Office of Campus Life and as the marketing coordinator for the Associated Student Activities Board. She was recently initiated into Delta Mu Delta Honor Society and serves as the group's historian. She is also the president and founder of ENMU's art club, called Arts, Creativity, Education and Design (ACE+D).

"We've previously been known as two different clubs, which I had also been a member of," she says. The clubs merged in the fall of 2018, creating ACE+D.

She was recently given the 2018-19 ACE+D Leadership and Philanthropic Award and was one of two recipients for the Excellence in Graphic Design award. She was also named Outstanding Coordinator of the Year for ASAB for her marketing job in April 2019.

Kathy loves the sense of community that being a Greyhound brings: "Although it is a smaller school, you can always find someone with similar interests to you and interact with them, or even start a club for it!"

She enjoys spending her time at the Campus Union. It's where she works, meets friends and finds that "good food is never out of reach. I probably spend more time at the CUB than anywhere else on campus."

The 21-year-old was born in Hampton, Virginia and moved to New Mexico when she was 11 years old. She has an older brother named Alex, who's 23 years old. Her father is an Air Force civilian equipment specialist, and her mom works at J. C. Penney as a cashier supervisor.

When Kathy isn't working on her graphic design for her job or work, you can find her watching YouTube, playing video games or experimenting with music.

"I like to sing and play instruments," she says. "I had grown up as a choir kid and attended all state for choir in 2015 and 2016. I know how to play the piano, the ukulele and like picking up other instruments when I can. Now, I'm beginning to learn how to play the guitar."