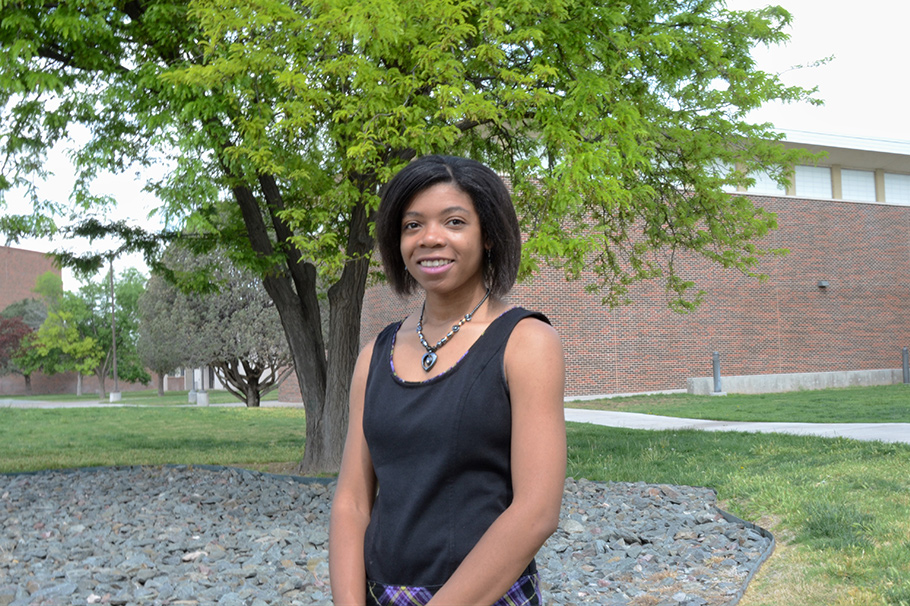 Nickkole Judy Celeste Williams, a graduate student at Eastern New Mexico University majoring in counseling, explains that her career goal is to "help people who believe that they have no other option. I want to be that option for them, regardless of where I am in the world.

"I want to be able to help people in and outside of a counseling office because not many individuals can afford therapy treatments. Choosing this field is only the beginning of what I will be accomplishing once I graduate from ENMU," she says.

The Greyhound is currently going into her third year as a graduate student and will be taking the Counselor Preparation Comprehensive Examination next summer. Once she completes the Counseling Master's Program at ENMU, Nickkole plans to move to Fort Worth, Texas to learn the Bio-Energetic Synchronization Technique (B.E.S.T) developed by Dr. M.T. Morter Jr.

"B.E.S.T is a non-forceful, energy balancing and hands-on procedure used to help re-establish the full healing potential of the body. Using the knowledge and experience I gained at my time in ENMU, I would like to combine my own familiarity from my yoga training, counseling experience and B.E.S.T skills; to one day create a facility that focuses on healing through non-conventional, but beneficial means," shares Nickkole.

When she graduated high school, Nickkole chose to pursue her degree at Eastern due to the affordable tuition and because many of her high school friends were also attending ENMU.

"ENMU became home to me. I'm proud to wear the ENMU logo on my clothes for all the organizations I am a member of," she explains. "I get to be a part of the most affordable and forever improving University that actually listens to my needs and makes me feel my voice matters."

She provides the following advice to students interested in her field of study: "Learn about burnout means before you enter this field. If you give too much of yourself you end up losing the main reason you started this career path in the first place; by overexerting yourself and not given time to your mental, physical and spiritual well-being you end up what is known as burnout. Continue to be a positive influence to yourself; no one can help you if you first can't help yourself."

While at ENMU, Nickkole has been involved in the Greyhound Sound Marching Band and marches during the fall semesters. From 2014 to 2015, she was the vice president of ENMU Krew. She was a front desk worker in the Eddy Dormitory from 2014 to 2017, as well as a resident assistant in Guadalupe Hall in the summer of 2016.

Currently, Nickkole is the president of the Japanese Animation Research Club. She is a member of the Counseling Student Initiative Club and has attended the New Mexico Counseling Conference in Albuquerque as a volunteer for the past two years. In her free time, she spins Poi Levi-Wand, belly dances and does yoga as a hobby and soon-to-be job.

"Yoga" and "East Asian Film" have been Nickkole's favorite courses. She explains, "Yoga is my preferred form of exercise, and anytime I get to participate in it I enjoy it ever time. My 'East Asian Film' class was the last fun class I took as an undergrad. It made me realize how much I enjoy both South and East Asian culture because I delve into the arts and traditions so much."

Nickkole was born in Marquette, Michigan and moved to Clovis, New Mexico since her parents were in the Air Force. Before her father's death in 2008, he was the IT manager at Cannon Air Force Base Hospital. Her mother worked as a model and a sales representative. She became a stay-at-home mother when Nickkole's father became sick, and is currently pursuing a Ph.D. in business. Nickkole is the youngest of five children, with one older sister and three older brothers.