Journalism Student Found Her Passion for Writing at ENMU 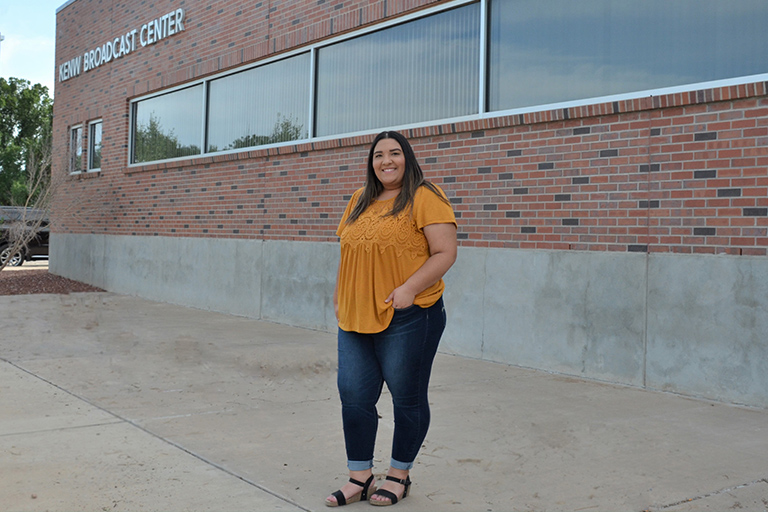 "I wasn't much of a writer before I came to Eastern, but with the encouragement of some of my communication professors, I was able to get out of my comfort zone and began to love writing," says Nicole Trujillo, a senior at ENMU.

Journalism Student Found Her Passion for Writing at ENMU

"Don't be afraid to step out of your comfort zone, because you never know what you can accomplish," says Nicole Trujillo, a senior at Eastern New Mexico University planning to graduate with a communications degree with an emphasis in journalism and a minor in graphic design in May 2020.

"I hope to become a reporter and photographer, but I would be happy doing other duties within the journalism field. My ultimate career goal is to supply the public with accurate news information and to make a name for myself within the journalism community. I want to be a role model for young journalists, like myself, and encourage them to pursue their dreams," Nicole states.

Born to parents Robert and Margaret in Las Vegas, New Mexico, Nicole is the youngest of four sisters, Amanda, Ellena and Stephanie. Her mother is a secretary for the Santa Rosa Health Office, and all of Nicole's sisters have children. They were raised in Santa Rosa, New Mexico, where Nicole developed her passion for journalism when she began working as a photojournalist for the newspaper, "The Communicator."

She explains, "I knew from that point forward that I could see myself doing photojournalism as a career. However, when I came to Eastern, I found a new passion within my field of study, reporting and writing. I wasn't much of a writer before I came to Eastern, but with the encouragement of some of my communication professors, I was able to get out of my comfort zone and began to love writing."

The senior says that the professors in the ENMU Department of Communication have encouraged her in her education. She specifically names Dr. Patricia Dobson as an influential mentor, stating, "She was the first professor I ever met, and ever since that day she has been with me every step of the way."

"Media Ethics" has been Nicole's favorite class at ENMU. Students in the course studied media coverage of news events and discussed if the story was portrayed ethically in terms of journalism. This class is one of many that has taught her valuable information.

Nicole, who has been on the Dean's List every semester since fall 2016, chose to attend Eastern for several reasons: "I visited as a senior in high school and absolutely fell in love with the campus. I grew up in a small community, so the class sizes at ENMU were perfect for me. ENMU is a very affordable college compared to others around New Mexico. Eastern was the only college I applied to after graduation. I knew after my visit that ENMU was the school for me.

"During my time at Eastern, I have gained many skills that will be beneficial for when I graduate. When I graduate, I'll have experience in photography, writing, editing, reporting, graphic design and layout," she says. "My favorite part about being a Greyhound is being able to tell people of my success here at Eastern and how attending ENMU has been one of the best decisions I've ever made."

Nicole has worked on campus at the Office of Human Resources since 2017. She is currently the editor of "HoundBytes," ENMU's online magazine. Additionally, Nicole is a recipient of the New Mexico Press Women's Scholarship.

She was a staff member of "The Chase" during the fall 2018 and spring 2019 semesters, where she received the "Most Valuable Person Award." Nicole thanks Alisa Boswell-Gore, an ENMU graduate assistant and editor of "The Chase" for the fall 2018 and spring 2019 semester, for encouraging her during her time as a staff member. She says, "Alisa pushed me out of my comfort zone of only wanting to do photojournalism. Alisa encouraged me to write and encouraged me to become a better writer. She mentored me and taught me a lot of what I know now about reporting and writing. It's because of her that I am the writer that I am today."

In her spare time, Nicole enjoys spending time with her boyfriend and their two dogs, Brinny and Oso.  She also likes crafting, writing, listening to music, fishing, photography and drawing.