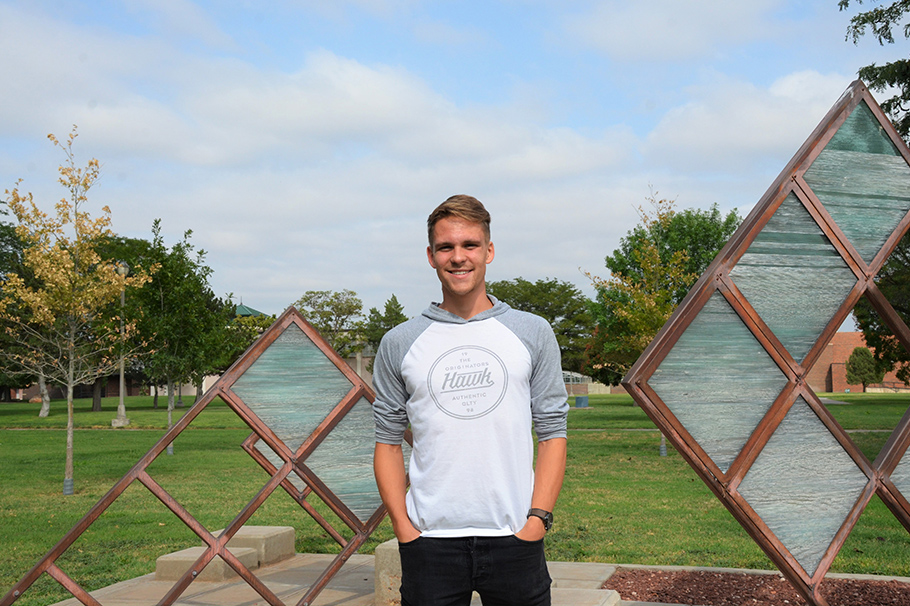 "I choose my field of study because I am interested in the processes in and on the earth," says Ivar Moinat, an international student at Eastern New Mexico University pursuing a bachelor's degree in environmental science.

"Right now, I want to go into urban planning, which is a little different than my field of study," states Ivar, who plans to graduate in May 2020. "I want to be involved in big projects, like building new neighborhoods and more specific projects. I don't really want to work on the technical side, but the planning side."

Born in Amsterdam, capital of the Netherlands, to parents Hans Moinat and Carolien Edwards, Ivar came to ENMU as an international student when he was a freshman. His parents and his brother, Maxim Moinat, now live in a smaller town outside of the city called Hoofddorp. His father, who he credits for his running abilities, was a runner who competed in the 400m hurdles.

"My favorite place on the ENMU campus is the Greyhound Stadium, where all the hard work is put in," the senior states. "I really like the Greyhound family. We are a fairly small school which gives us a sense of unity. Representing the Greyhounds in sports is a great feeling because there are a lot of people behind you who are proud."

Ivar, who has been on the Dean's List for six semesters, took a leap of faith when choosing to attend ENMU. "I was attracted to the environmental science major, and I had a good opportunity to be on the track team. It was hard to choose a school from far away because I was not able to visit, but it has been a great choice," he says.

While at Eastern, Dr. Jim Constantopoulos, Ivar's advisor and teacher almost every semester, has been a mentor to him in the field of environmental science. He also mentions Dr. Corey Cole, who taught his "Freshman Seminar" course, for being a great mentor who helped him adjust to moving away from the Netherlands during his first semester.

"Landscape Ecology and GIS" has been Ivar's favorite course at Eastern. He explains, "Working with all kinds of data and using that to create a map was very interesting, and I learned a lot that I hope to use later in my career."

To his peers in the field of environmental science, Ivar offers this advice: "Stay open-minded and take in all the information you are getting over the years. It's a very broad field, and you have to look for your own interest within it. Get involved in discussion with your peers and listen to different views and approaches."