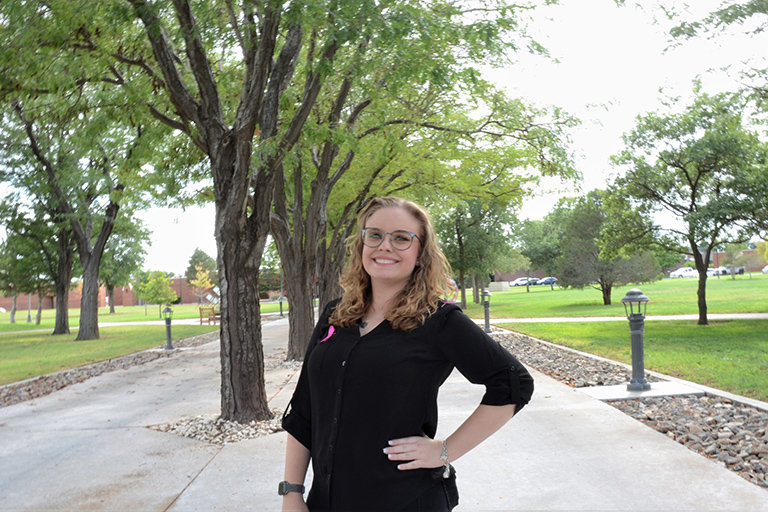 Abigail "Abi" Hope Turley is a student at Eastern New Mexico University double majoring in psychology and sociology with an emphasis in childhood development.

"I chose this field of study is because I love kids and I want to make an impact in their lives," Abi says. "I would like to be an organizational psychologist to use psychological principles and research to improve quality of life."

Abi, who was on the Dean's List spring of 2019,  found her passion for working with children when she took "Child Psychology" her first year at ENMU. "There are many things that I ultimately want to achieve in my career, the first being getting to work with at-risk children and teens both in the home and at schools," she shares.

The sophomore spent her middle school and high school years at Talkington School for Young Women Leaders, a small, all-girls school in Lubbock, Texas. Her upbringing there aided her in making the decision to attend Eastern because of the "individualized attention" students receive due to the small class sizes.

"Going to a small university allows professors to easily help you if you are struggling. My favorite part about being a Greyhound is that we have such a tight-knit community here on campus. Everyone is very loving and caring towards each other," Abi states.

Beatriz Villa, an American language and culture director and instructor, has been an influential mentor to Abi her during her time at ENMU. "She helped me so much my freshman year and gave me really good advice that I will be able to use throughout my time at college and thereafter," Abi explains.

Abi is a member of the sorority Zeta Tau Alpha and is involved with TRIO Student Support Services where she receives assistance with classwork. She also works at the Department of Agriculture, Food Science and Kinesiology. Outside of these activities, Abi enjoys painting, cooking, watching television, cleaning and hanging out with friends.

She says her favorite place on the ENMU campus is the Golden Student Success Center: "There is little distraction which allows me to get my homework done faster. Also, it provides tutors most of the time that you can get help from."

Abi was born and raised in Lubbock, Texas. She has two stepbrothers, Seth, 13, and Eli, nine. Her mother works for United Supermarkets as an administrative assistant, while her stepfather works as a senior CAD manager at SGS Engineering. Her father owns his own exterminating company called Addison Pest Control in the Dallas area. Her stepmother is a stay-at-home mom and helps with her stepbrothers' Parent Teacher Association at their school.