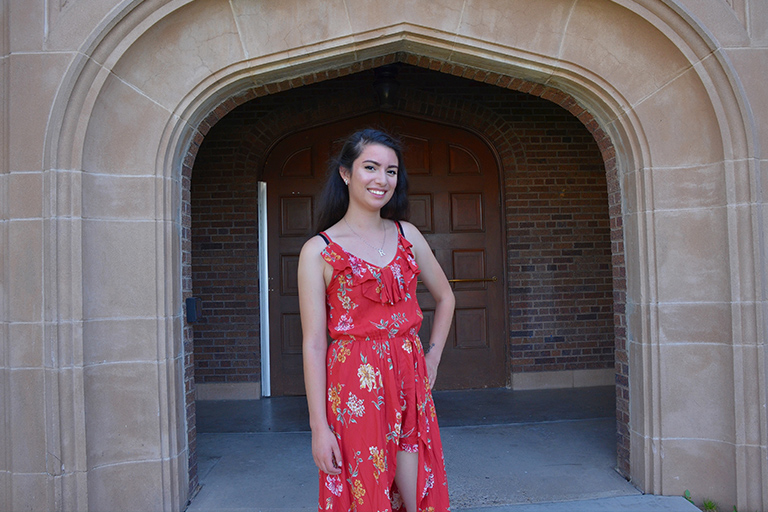 "I've always had a love of helping others, children and learning. I figured being an elementary school teacher was the best way to combine those three," says Rachael Jimenez, an Eastern New Mexico University student double majoring in elementary education and special education with a minor in English as a second language.

When Rachael graduates in the spring of 2022, she is going to pursue a career as an elementary teacher, working between second and fifth grade. "Ultimately, I hope to impact my students' lives as much as my teachers impacted mine," she states.

The sophomore was on the Dean's List in the fall of 2018 and spring of 2019. In the fall semester of 2018, she was in the Greyhound Sound as a flute player. Rachael is currently a member of the sorority Zeta Tau Alpha. In her downtime, she enjoys watching movies, being with her friends and painting.

Rachael acknowledges Dr. Dhimitraq Duni, assistant professor of mathematics education, and Dr. Donald Elder, professor of history, as being influential mentors to her while she has been at ENMU.

She also mentions Yetta Massey, who taught her in "Communication for Educators," which has been her favorite course in college. Rachael explains, "We did a lot of fun projects and group assignments in that class, and I feel that I learned valuable information for my career."

Rachael was born an only child in San Antonio, Texas, to her mother and father who were in the Air Force. Her mother retired after four years, and her father retired after 27 years in 2009. They lived in Anchorage, Alaska, and Fort Walton Beach, Florida, before settling in Clovis, New Mexico, 10 years ago. Her mother is currently a homemaker, while her father is an aircrew instructor at Cannon Air Force Base.

"I chose ENMU because of how close it was to my hometown and because of the cost. I love that it is a smaller university, so I can get to know a lot more people and professors," she says. "My favorite part of being a Greyhound are all the people that are also Greyhounds."

To her fellow Greyhounds, Rachael says: "My biggest piece of advice would be to make friends with the people in your classes. Most of these people will be taking many of the same classes as you, so having them as your friends will make things that much easier."