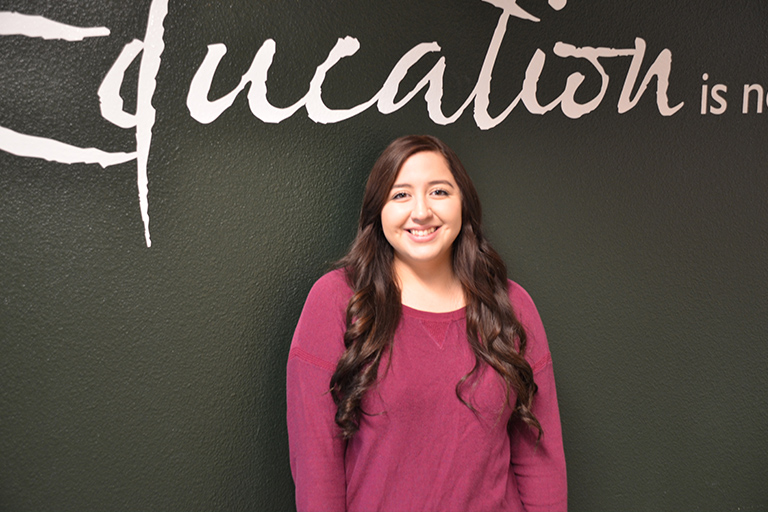 Reyna Ibarra is a forensic science major with a minor in criminal justice at Eastern New Mexico University.

The senior found a passion for her career path long before she began her college career. "I chose forensic science because I had a class on it senior year of high school, and I fell in love with all of the concepts and the idea of justice." says Reyna.

Reyna plans to use those concepts to help further her career options. "I hope to either work as a patrol officer for a few years and move my way up to homicide investigation or K9 training, or obtain an alternative license and be a high school teacher," she shares. "I would love to be able to teach science and get others passionate about pursuing jobs in the field."

She hopes to spark an interest in science and to give people a good foundation for any future science classes they look to take. "I want to be able to provide the same passion that I had when I took forensic science in high school. I would also love to get more girls involved in the STEM field and realize their full potential," she explains.

Reyna has made an effort to be involved on campus and has made her education a priority. She has been on the Dean's List since attending ENMU and has been involved in several student organizations.

"I am currently the vice president of the Forensic Science Society, and previously was the secretary for two years. I am the current secretary and director of Programming of Chi Omega and previously was Community Service chair. I have also done several community service projects with Chi Omega, such as Swishes for Wishes, volunteering at the Baptist Children's Home and Pie a Chi-O," she says.

A big mentor for Reyna has been her advisor, Dr. Kenwyn Cradock: "He always helps me decide which classes would be best to take and encourages me to look into a variety of career paths."

Another mentor for her has been Chief Donald Raley: "He has taught me criminal procedure and ways to be a better person in the forensic science field."

This Greyhound has some encouraging words for those looking to pursue a career in forensic science. "My advice to people in forensics is not to give up," she shares. "There are some really hard science classes in this degree, and I felt I wasn't smart enough to take them, but with perseverance and making connections in class, you can easily form study groups and help to get everyone prepared to pass the class."

Reyna has found herself part of a larger community here at Eastern. "My favorite part of being a Greyhound is how easy it is to meet other people. Everyone is so welcoming, nice and genuinely want to help you. Coming to Eastern has given me opportunities I wouldn't have had if I would have gone to a larger school. Being in organizations has helped me feel like I'm involved in something big that is benefitting the campus and community and has given me great leadership skills."

Some of Reyna's hobbies are snuggling up in a blanket and watching scary movies (or "The Office"), playing Overwatch and being around the people close to her.  "I love the tradition my friends have created of playing 50 rounds of Mario Party after we finish with finals week," she adds.