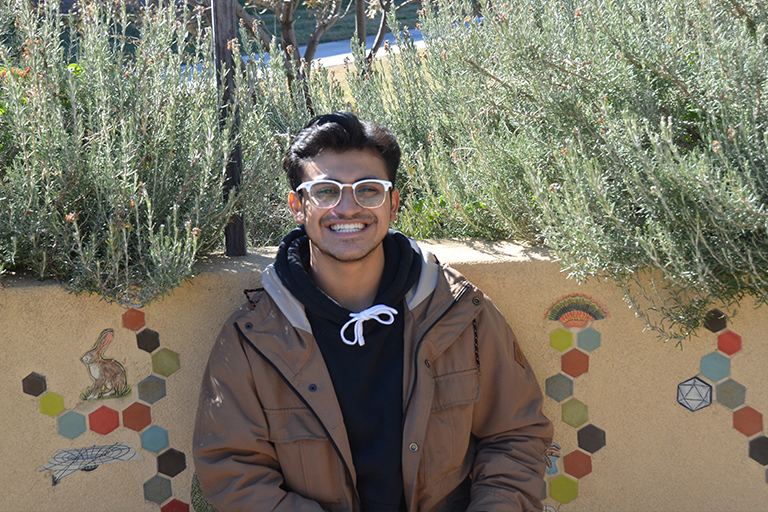 Samuel Coronado is a sophomore at Eastern New Mexico University majoring in biochemistry and minoring in Spanish and industrial mathematics. He expects to graduate in the spring of 2023 and continue to pursue his fascination with science and his passion for helping others.

Samuel moved around quite a bit in the early years of his life, but would eventually settle down in the state that would become home for him and his family. "I was born in Denver, Colorado. Once I turned about 8, my family moved to Louisiana, but we would come to New Mexico when I turned 11. My mother is an insurance eligibility specialist at a first-choice community health clinic, and my father is the country sales manager for LogMeIn," he said.

A recipient of the Safe Ride scholarship, Samuel has a deep interest in his various fields of study. "The universe is a finely-tuned instrument, and learning about the intricate details has always been why I loved science. Here at Eastern, I learned to apply varies subjects and resources to continue to learn about the body and the world around me, but I have a vision of what I would like to study in the future thanks to good professors," Samuel described.

Samuel hopes to use the experience he gains both in school and in his extracurricular activities to help further his goals and aspirations after he graduates. This Greyhound hopes to accomplish much after graduating from ENMU, including graduate school, vocational opportunities and an eventual career as an anesthesiologist. "Ultimately, I would like to help people become healthier and educate them on their own health. I believe a lot of doctors say things to patients, and the patient believes every word without any doubt; this deserves more attention because doctors are human as well, and can make errors.

"I would love to join the circus after undergraduate school at least for a couple of months to experience an extravagant side of life. I also will attempt to become a traveling musician between the ages of 24-26. After that academic rest period, I will attend graduate school, open up my opportunities to the medical world and dive all in," Samuel said.

Sam believes that everyone has a story to tell and something to teach if you are willing to learn. "Rey Coss, Annamarie Short and Melissa Sena have inspired me to treat people differently. These three people have embodied ideals and virtues that I admire and respect. For that, I am thankful that they have poured into my life and been in my life to mentor me when things get rough," he said.

Eastern New Mexico University felt right for Sam. Being on campus and seeing people willing to help him was a huge factor in him joining this community. "My favorite part about being a Greyhound has to be the opportunity for self-development, my peers seem to understand that concept as well, as we push each other to be better individuals," he added.

Samuel holds deep interests outside of the fields of science and math. He enjoys playing both guitar and piano in his spare time, as well as reading books about the education process, self-development and the "Percy Jackson" series when he's feeling blue.

His favorite class at ENMU has been aerobic swimming, where he finds an opportunity to check in on himself both physically and emotionally. Sam has also found a place on campus that he finds truly fascinating, not too far from where he takes his aerobic swimming class. "My favorite spot would have to be this artistic dome seating area in front of the science building. That was one of the first places I hung out because I did not have many friends at the beginning of my freshman year," he described.

Samuel has some words of advice for anyone thinking about starting the same career path: "Surround yourself with a good group of people to influence you to do what is best for yourself. Understanding why you work is a main part of the learning process, but focusing on what you're putting in each day is more critical. It may set you up for success or failure in the upcoming five years."