ENMU Business Student's Goal is to Work for the NFL 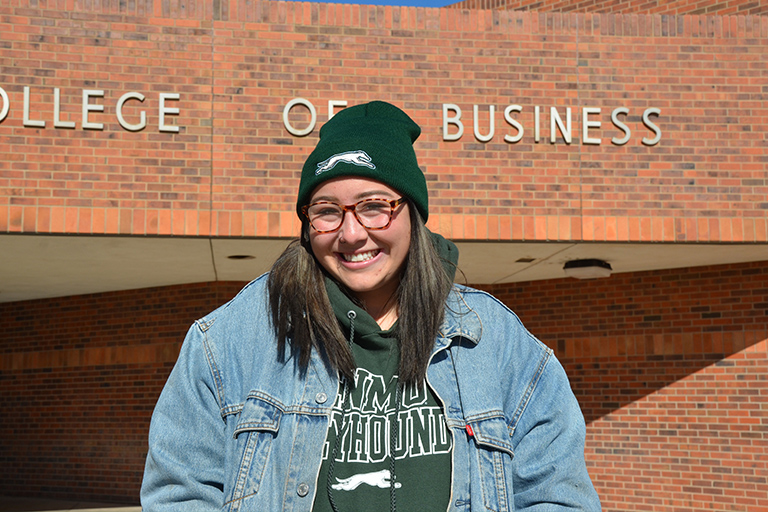 Jayci Nigreville is a junior at Eastern New Mexico University majoring in business administration with an emphasis in marketing. "I chose business and marketing because I've always been interested in how products sell and how marketing can influence people in such drastic ways," Jayci described.

She hopes to graduate in the fall of 2020 and to start working towards her Master of Business Administration in the spring of 2021.

Jayci is a member of several on-campus organizations, including Chi Omega and ASAB, and has participated as a Dawg Days counselor. "I work on campus in Human Resources and in the library as a tutor. I also volunteer at my church in Clovis, New Mexico, Faith Christian Family Church," said Jayci.

Jayci's family are active members of her hometown community with her brother participating in sports, and her parents having served the people of Clovis for several years. "I was born and raised in Clovis. My 16-year-old brother, Jaden, who attends Clovis High School. My parents are John and Carrie Nigreville. My mother works as the executive director of Strategic Planning and School Support for Clovis Schools, and my father is the sales manager at the Hamilton Toyota Dealership in Clovis," she said.

A long-term goal for Jayci is to work on the marketing team for a college football program. Her ultimate goal is to work for the NFL or a Division 1 university. "Other dreams I have include being a wife and mother one day, and to travel the world," she said.

As most Greyhounds do, Jayci has found a mentor to help her attain her personal and professional goals. "Dr. Robert Schneider [assistant professor of management] has had a large impact on my life during my time here at Eastern. He has not only been my advisor but my favorite professor! He is a great leader; he leads by experience and example. He has helped me find lots of opportunities to further my career after my time has ended at ENMU," explained Jayci.

Jayci's favorite place on campus is the Golden Student Success Center. As a tutor and member of the dean's list, she certainly spends plenty of time in the library. "It's a central location on campus that has not only a place where I can get coffee and study, but a place that hosts a community among students," she described.

Jayci's favorite class at ENMU so far was Organizational Behavior. She enjoyed the opportunity to learn about a vast variety of management techniques and how to recognize employee emotions. This was a class that really struck a chord with Jayci, and gave her insight into managing both her professional and personal relationships.

The Greyhound chose to attend Eastern because of the supportive community and closeness to her family and hometown. "I transferred to ENMU to have a more personal connection to a university," said Jayci. "The school I transferred from was extremely large, and it seemed as if I was just an ID number. I knew at Eastern I would experience the personal connection to students, teachers and the University that I longed for."