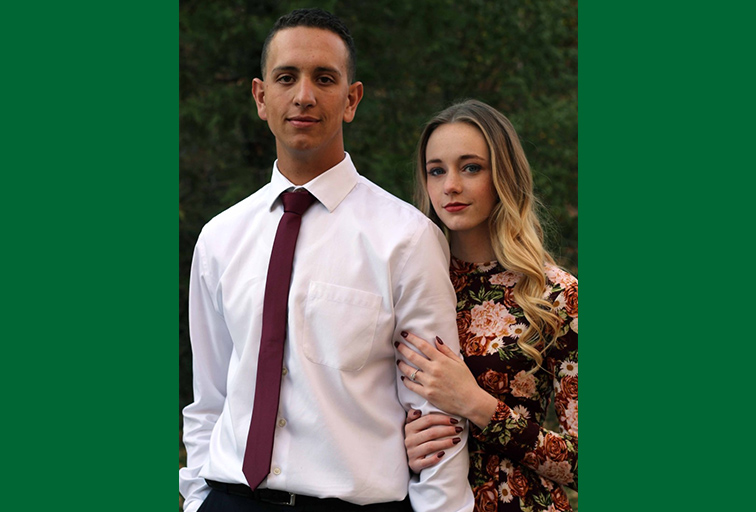 Jon DeLaMare and his wife, Becca

Braden "Jon" DeLaMare is a Greyhound who is making sure he can accomplish his ambitions and goals to provide for his family and be the best father he can be. Jon is majoring in business administration with an emphasis in personal finance planning. He chose this major because he is "great with numbers and has always wanted to get a business degree."

He hopes to have a career as a financial analyst, adding, "I would love for my career to eventually lead me to a CFO position, preferably with something to do with sports."

When asked what advice he would give to students interested in his degree plan, Jon replied with, "Stay on top of assignments and get a planner. Business is part of everyday life, so you know more than you think; relax and soak in as much information that you can. Every class helps you in the next one."

Jon is a senior at Eastern New Mexico University and expects to graduate this spring. He has been on the dean's list for three consecutive semesters.

His go-to spots on campus are the baseball field and LV's weight room. The athlete shared that since he is on the baseball team, "it is only fitting that those are my favorite places."

He chose ENMU because of the opportunity he had to transfer from his junior college in Salt Lake City, Utah, to continue his baseball career.

The Greyhound's favorite things about his Eastern Experience have been "becoming a dawg, living for the grind and being an underdog at everything."

Jon, who serves as a peer mentor for ENMU's Greyhound Connection, has had "a bunch of professors who have been able to mentor me." He named finance professors Corey Cole and Dr. David Hemley as his biggest mentors. "They have given me great advice and aided in the path that I have chosen," he explained.

Finance classes have been a highlight of Jon's academic career. "It has given me perspective into what I am going to be doing in my career. They are classes that interest me, which makes me want to gain as much information in them as I can," he said.

The business administration major was born and raised in West Valley City, Utah. He has twin older sisters. His dad works in management as a paramedic, and his mom works with medical equipment.

When Jon has free time, he likes to do anything sports-related, including baseball, basketball, football, soccer and volleyball. He enjoys playing video games, exercising and hanging out with his baby girl and wife.

His dream is to "watch my beautiful daughter to grow up and be better than me at anything she gets involved in."