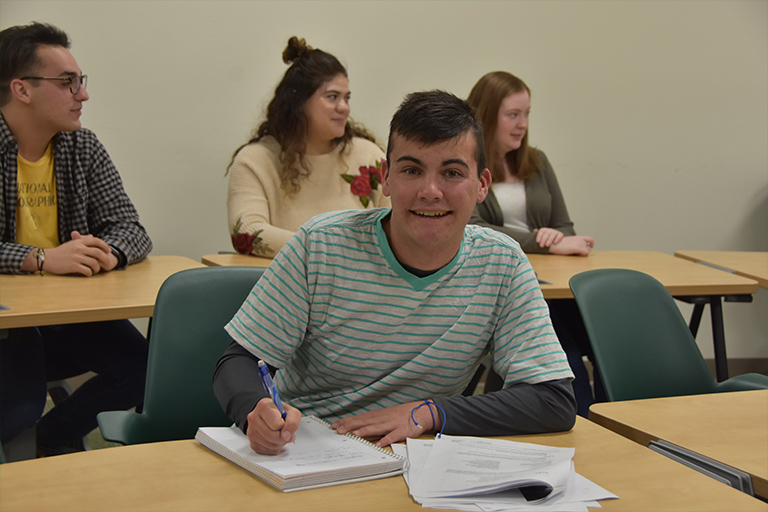 Zach Chadwick, who is majoring in communication with an emphasis in broadcast journalism at Eastern New Mexico University, plans to have his own tv show one day.

"I chose this field of study because I have a huge passion for NASCAR and my dream is to go into a big network with sports and have my own tv show," says Zach, who wants to have a career as a broadcaster calling races for NASCAR and have a studio of his own in Charlotte, North Carolina.

The ENMU freshman was born and raised in Las Cruces, New Mexico. His mom is retired, and his father is an eighth-grade English teacher through Gadsden Independent School District. In high school, Zach participated in cross country, track, National Honors Society and student government.

He worked for a local radio station, did an internship with Channel 7 News in El Paso, Texas, and volunteered for a local soup kitchen, where he serves as a board member. He was also traveled to New Orleans to receive the Billy Michal Student Leadership Award, given annually to one student from each state and the District of Columbia who demonstrates the American Spirit in their community.

At Eastern, Zach is a President's Ambassador. He chose to attend ENMU because the "people were the friendliest and willing to work with the student one-on-one. ENMU was the only school in New Mexico that offered my major, and it is the perfect distance away from home where I can have my freedom."

His favorite place on campus is the Campus Union because "that is where the cafeteria is, and I can hang out with my friends. In the lobby area, I can also work on my homework, and my friends can meet me there before class if I have trouble."

The Greyhound's favorite class at ENMU so far has been Public Speaking, "because it made me a better people person, and a lot of my shyness went away. I was able to open up, and it helped me with speaking up to be vocal. This is all very important for what I want to do in my future."

The broadcast journalism student's advice to Future Greyhounds who are interested in his major is to "strive to do the best that you can, and so many possibilities are out there in the future. You can do a lot with this major, and it is a lot of hands-on learning. You can ask other people for help if you struggle with a certain area."

His favorite things about being a Greyhound are "being around great people and making a name for myself, along with how small the class sizes are. That makes it a great learning environment where you can ask the professor anything, and they will do their best to help the student one-on-one and, if they are unavailable, you can do tutoring for free."

Zach's hobbies include running, swimming, hiking, riding his bike, listening to music and watching NASCAR. He also loves helping others in need and taking pictures.

An interesting fact about Zach is that he got to meet his idol, former NASCAR driver and broadcaster Darrel Waltrip, and go inside of NASCAR's corporate headquarters in 2013. He saw the ins and outs of how things work behind-the-scenes, met all the NASCAR drivers and received the official coin of NASCAR.

Zach's goals are to be "successful in doing what I love with NASCAR and having a healthy family with my dream home and car." He also wants to travel the world, visiting all seven continents and as many countries he can. He shares, "One big dream I have is completing the Worlds marathon challenge, which is seven marathons in seven days in seven continents."