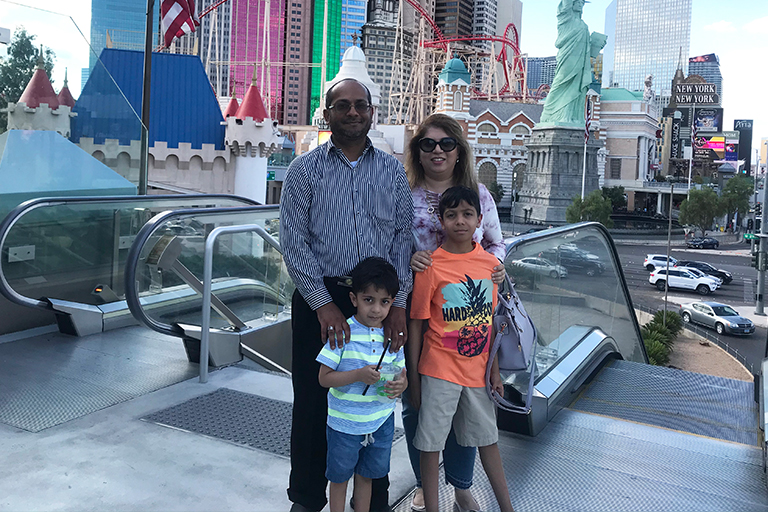 Yousuf Ali Moiz with his family in Las Vegas, Nevada.

Mr. Yousuf Ali Moiz is a 100% online student majoring in electronics engineering technology at Eastern New Mexico University with the hopes of becoming a home inspector in Las Vegas, Nevada, after graduating from Eastern in fall 2022.

The ENMU student was born in Karachi, Pakistan, and raised in the Dubai-United Arab Emirates. He attended Saint Mary's Catholic High School in Dubai. He has two brothers and one sister. His mother is a housewife, and his father was a radio technician who served the Umm Al Quwain Broadcast Radio Station for 25 years. Yousuf is married and has two boys, age six and 13.

Yousuf, who works full-time as a contractor and telecom specialist for Verizon, chose to attend ENMU due to the University's "good reputation and being well-accredited," as well as the easy process of transferring credits from his previous college.

The ENMU International Club member chose to continue on an EET path after completing a three-year EET diploma course from Mohawk College in Canada, where he graduated with a 3.98 GPA.

The senior enjoys ENMU's "great social interactions and activities that keep you healthy and relieve stress."

An ENMU EET professor that has stood out to Yousuf is Dr. Hamid Allamehzadeh. "My favorite classes are electronics courses with Dr. Hamid," shares Yousuf. "It is really fascinating, and I have lots of hands-on experience with labs."

Yousuf advises students interested in pursuing a degree in EET is to "study hard to the best of your ability. Don't study for the sake of getting a degree but try to get the maximum out of it.

"Always get in touch with instructors if you have any difficulty. Other resources are YouTube and the internet; there is a ton of helpful information. This will really pay you out when you complete your studies. You will be ready to face the real outside world with confidence."