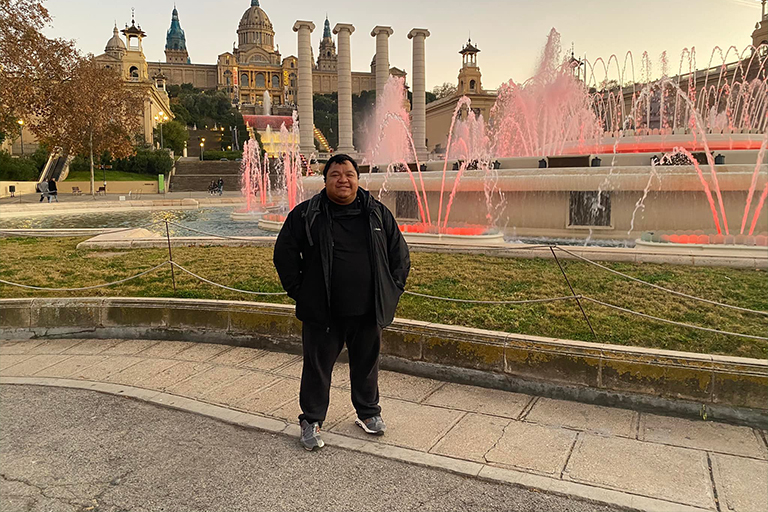 Robert Mady in Spain in December 2021.

Robert Mady plans to graduate this semester with a bachelor's degree in communicative disorders from Eastern New Mexico University. This is Robert's second bachelor's degree; he earned an English degree from the University of North Carolina at Charlotte in 2019.

Robert was born in Danbury, Connecticut, and raised in Albemarle, North Carolina. He is the youngest of four siblings. His parents were Laotian (Laos) immigrants who came to the United States as a result of the Indochinese refugee crisis and the Vietnam War.

The first-generation college student shares why he decided to continue his academic journey at Eastern: "As an adult student, I wanted a program that flexible with my overall demanding schedule, yet affordable. Therefore, with ENMU's asynchronous courses, I am able to work a full-time job without compromising the quality of my education.

"The instructors and community make being a Greyhound worth it, even from a distance (education)," he adds.

Robert's mentor at ENMU is someone he aspires to be like: Nicole Bougie, an instructor of Communicative Disorders. Robert shares, "I think she's a phenomenal Anatomy and Physiology of Speech and Hearing professor, and I want to be at her level when it comes to knowing the different parts of the body as a speech-language pathologist."

The dean's list honoree's favorite course at ENMU was Neuroscience with Dr. Linda Weems, a professor of Communicative Disorders.

He advises students with similar interests to "come into the field with an open mind and an open heart. Communication is not just black and white but has many wonderful shades and colors because the people we will interact with come from diverse groups, cultures and communities."

The National Student Speech Language Hearing Association (NSSHLA) member enjoys cooking and traveling. He hopes to travel more in the near future. "I went on my first European trip to Spain in December 2021, so I want to explore more of Europe in the future, pandemic safe, of course," he explains. "I want to go back to Asia and explore more countries."