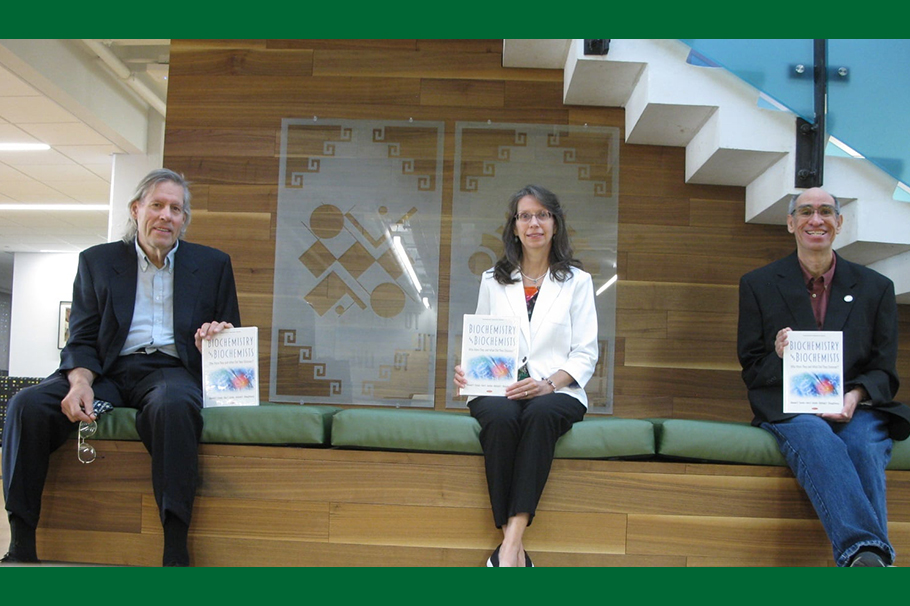 Dr. Manuel Varela, a professor of biology at Eastern New Mexico University, has been selected to join two committees for Harvard Medical School's "Memorial Minutes" initiative, which pays tribute to deceased faculty members for their contributions to the fields of science and medicine.

Dr. Varela will serve as the chair of the committee devoted to writing a memorial for Dr. Thomas Hastings Wilson, a professor of cell biology. He will also participate as a member of the committee responsible for crafting a "Memorial Minute" for Dr. Eugene P. Kennedy, a Hamilton Kuhn professor of biological chemistry and molecular pharmacology.

The ENMU professor discusses his connections to the two prestigious professors and how his work on these committees will honor their memories.

What is a Memorial Minute?

Who was Dr. Thomas H. Wilson?

Dr. Tom Wilson was my mentor when I was a postdoctoral fellow at Harvard in the mid-1990s. I studied the physiology of sugar transport in bacteria in Tom’s research laboratory. In particular, we isolated bacterial mutants that had altered appetites for various sugars. For instance, we discovered mutants that favored the milk sugar lactose’s entry but not that of the plant sugar called melibiose. We also participated in finding a so-called salt-bridge between two charged amino acids in the lactose transporter.  Tom Wilson’s research was also critical to the discovery of energy-coupling systems that operate during lactose transport. Tom was also one of the first investigators to isolate the lactose transporter protein in pure form, a fantastic achievement in the day. We wrote a review article summarizing the history of the lactose transporter in Escherichia coli.

An earlier discovery in the 1950s by Tom Wilson involves his invention of the so-called everted gut sac. It made Tom and his collaborator Gerald Wiseman quite famous. The technique involved taking a segment of a lab animal’s intestinal tract, making it inside-out and tying the two ends together to form the everted gut sac. The method provided an excellent means of studying nutrient transport from the gut to the blood. The technique is still used in modern times to study gut physiology.

Tom and his wife, Dr. Dorothy M. Wilson, collaborated for over 20 years. They were two of the friendliest human beings I have ever known in my professional life. The Wilsons studied the melibiose transporter in bacteria. They made many scientific contributions, all dealing with the mechanism of sugar transport across the bacterial membrane. It was a real pleasure to work in the Wilson laboratory because of Tom and Dorothy’s friendliness. The Wilsons were good us, my wife, Ann, and my then infant-toddler son, Timothy. Sadly, the Wilsons died a few years ago, and we miss them terribly. But they leave behind a real scientific legacy of sugar metabolism in bacteria. The Wilsons had four devoted children and many grandchildren and great-grandchildren. Tom Wilson has left behind a tremendous collection of scientific discoveries that will be summarized in his "Memorial Minute" tribute.

Who was Dr. Eugene P. Kennedy?

Dr. Eugene Kennedy was a professor at Harvard Medical School. Kennedy had introduced sugar biochemistry research to Dr. Wilson in the late 1960s into the 1970s. Hence, Wilson picked up the interest in studying lactose (a milk sugar) transport across the bacterial membrane. In the mid-1990s, I had chosen to study lactose transport under Tom’s guidance because of his work with salt bridges and sugar selection mutants. Hence, were it not for Dr. Kennedy, who profoundly influenced Wilson’s research interests, I would never have gone to Harvard.

This year, my wife, Ann Varela, and I and our collaborator, Dr. Michael Shaughnessy, published a book together. The book is entitled "Biochemistry and Biochemists: Who Were They and What Did They Discover?" In the book, we devoted an entire chapter to Eugene Kennedy, chapter 10. The folks at Harvard Medical School noticed our chapter on Kennedy, which released ahead-of-time in an Education Newsletter piece.

Kennedy and his Ph.D. advisor Albert Lehninger are famous for discovering that the Krebs cycle pathway of metabolism occurs inside the cell organelle called the mitochondrion. Kennedy and Lehninger would also find that the biochemical processes of phosphorylation and fatty acid synthesis also happen inside the mitochondria. These discoveries will forever place Kennedy in the textbooks devoted to cell biology, biochemistry and biology.

What does it mean to you to be appointed as the chair of the committee for Dr. Wilson and a committee member for Dr. Kennedy?

I consider it an honor to have been asked to participate in both of these activities. I know that our written contributions will be permanently archived and possibly studied by future historians of science. Writing about scientists and their discoveries is one of my favorite pastimes. My interest in writing is thanks to my wife, Ann, who has worked tirelessly with me and Mike Shaughnessy. He got us involved in producing new contributions in articles and books about scientists.

What are your duties and responsibilities as the chair of the committee for Dr. Wilson? What is the timeline of the project?

As chair of the "Memorial Minute" committee for Tom Wilson, we are finalizing the committee membership.  We will consider Tom’s early life, education, first discoveries about animal physiology and his later work dealing with sugar transport physiology. I am hoping we can involve Tom’s family to write about his personal life. We hope to complete the project in about six months and have the tribute ready for archival shortly after.

Discuss your involvement on the committee for Dr. Kennedy.

I was appointed to Dr. Kennedy’s committee only very recently. I am not entirely sure what my specific role will be at this stage of the process. We are told that our commitment can range widely. For instance, we may be asked to write an entire section devoted to a scientific period, write a paragraph or two, add a few text lines or edit a draft version. Whatever the case, I am eager to get started and become part of this archival process. Thanks to Ann Varela and Mike Shaughnessy, I thoroughly enjoy this sort of scholarly activity.

Tell us about your academic background and involvement in other committees.

I have a bachelor’s degree in biochemistry and a Ph.D. from the University of New Mexico in Albuquerque in biomedical sciences, emphasizing biochemistry and molecular biology. I have postdoctoral training in microbial physiology from Harvard Medical School in Boston, Massachusetts. I have been an NIH-INBRE steering committee member, an editorial board member of the journal called  Frontiers in Microbiology, chair of the Allied Health Sciences Advisory Committee, a faculty senator, a member of the ENMU library committee, the ENMU faculty lectureship committee and the IACUC and the human subjects committees, to name a few. I have been a faculty member at ENMU for over 23 years. The research in our laboratory deals with bacterial antibiotic resistance.

The "Memorial Minute" pieces will be permanently archived and possibly read to the faculty of Medicine at Harvard if selected.