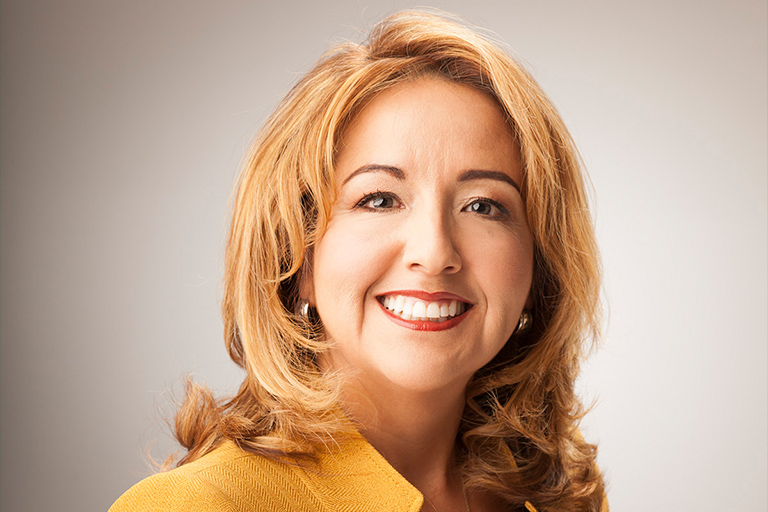 Ms. Dora M. Dominguez, who graduated with a bachelor's degree in journalism and political science from Eastern New Mexico University in 1989, is the director of Business and Economic Development for Sandoval County, located in New Mexico.

Ms. Dominguez, who also holds a master's degree in organizational management from the University of Phoenix, discusses her Eastern Experience and career.

It remains an honor and privilege to work in Public Service. Working in economic development means working to ensure the quality of life associated with new and good jobs are closely connected.

My short-term goal is to continue to lead the business and tourism initiatives for Sandoval County in accordance and adherence to the highest professional standards the department known for and highly regarded. Long-term – for economic developers it is all about jobs. How to support the existing business community and retain jobs, while working to ensure the recruitment efforts for the county are directed in a manner that ensures quality job growth and supports a community's improved quality of life.

Having the opportunity to work within my field of study while still a student attending classes proved invaluable not only in securing my first job out of college but that experience introduced me to a work ethic that remains with me to this day.

I grew up in Jal, New Mexico. Out of a graduating class of about 34, half the senior class that year all went to Eastern. One classmate chose NMSU, five elected to attend the New Mexico Junior College and three or four went to San Angelo State. Jal was and remains very much a ranching community.  That said, that year Eastern lost a few future Greyhounds who opted out of college and instead opted to work the family ranches.

"All The President's Men" came out as a movie in 1976. I was very young, and I knew there was no chance I would get to see it in a theatre. However, I had the wherewithal to know I could check out the book at Jal Library. The idea of journalism as a future career was a direct inspiration of the novel. The impact of Woodward and Bernstein's work on exposing the Watergate scandal still resonates today. While working on a journalism degree at ENMU, I also had the opportunity to work as a student reporter for the Office of Information Services. Being able to graduate with that experience and freelance reporting, positioned me for my first newspaper reporting job in 1989. Not all first-year reporters have the opportunity to work as news reporters while still attending college. Even a long time ago, this was a big deal.

I remember, as a senior, my Advanced Journalism class was taught by Jack Swickard. Jack was the editor and general manager of the Roswell Daily Record and formally the editor of Farmington Daily Times. Jack was a believer in the value and importance of local news. He encouraged us to learn about our local community and the importance of community news.

Which previous jobs have you held?

Since graduating from ENMU, I've worked in many professional capacities, most of which with a focus on small businesses and job creation. For three years after graduating from Eastern, I worked as a newspaper reporter for the Amarillo Globe-News, after which I went back to college and completed my master's degree. While news reporting was early in my career, the same skills learned then support everything thereafter. Those experiences have included my work as the Greater Las Cruces Chamber of Commerce president/CEO and rural tourism development for NMSU's Cooperative Extension Services. Today, I serve as the director of Economic Development for Sandoval County. Prior to Sandoval County, I was with the State of New Mexico Economic Development Department. While working for the State of New Mexico, I worked as the regional representative – based out of Las Cruces, New Mexico. During that time, the region I covered included Roosevelt, Chaves and Curry Counties. Prior to coming onboard with Sandoval County, I served as the senior economic developer for the City of Albuquerque.

Write every day. Start building your professional network while in college, search out every avenue for freelance writing and internships early. Read "All the President's Men" and watch the movie.

What do you hope to achieve in your career?

To continue to work in a career capacity that requires and provides the opportunity to work directly with community to improve the quality of life of my local community and for the State of New Mexico.

In some form and capacity over the past 25 years, I have remained involved with ENMU Alumni Affairs and the ENMU Foundation. I believe in the importance of giving back as an alumnus. Giving back to your alma mater is important, whether you're a Greyhound, Lobo or Aggie. Pride of school, community, family and self are key.

I am married to John Cordova, also an ENMU Alumni (1985). John and I have been married for 28 years and have a 25-year-old son, Alfredo P. Cordova. Our son is a music education graduate from the University Of New Mexico (UNM). Alfredo is the band director at Taft Middle School in Albuquerque. He is married to the lovely Maris Daugherty, Sandia Prep Orchestra instructor. Maris and Alfredo are expecting their first baby later this year. John and I are also the primary guardians and caregivers for a grand-niece, Gabriella Florez, 17, and her brother Estevan Florez, 15. Both attend Cibola High School in Albuquerque.

I remain connected to colleagues and peers from a professional network of over 25 years. I've worked throughout the state and traveled to every New Mexico county over the years. Learning from the expertise of others is the upside of years of work experience in New Mexico. My work at the City of Albuquerque and the State Economic Development Department in Santa Fe added to the list of not only colleagues and expert resources but also great lifetime friendships.

What are some of your accomplishments?

I believe in community mentor programs and have graduated from both Leadership Albuquerque and Leadership Sandoval County. I also participate as a member of the state organization for economic developers NM IDEA. I completed the University of Oklahoma's two-year Economic Development certification program in 2017.

I enjoy mountain hiking and have hiked all of New Mexico mountain peaks, including Wheeler Peak.

While at ENMU I had the opportunity to meet artist/celebrities in the 80's that might be familiar names still today including; George Strait, Robin Zander (Cheap Trick), Grace Slick, John Cafferty, Terri Nunn (Berlin), Jane Gardner (Vixen) and P.J. O'Rourke, political writer, to name a few of the performers/entertainment that came to ENMU from 1984-1989.

I feel very honored and privileged to have amassed my professional career in economic development in New Mexico.