A Trip to the ENMU-seums: Roosevelt County Historical Museum 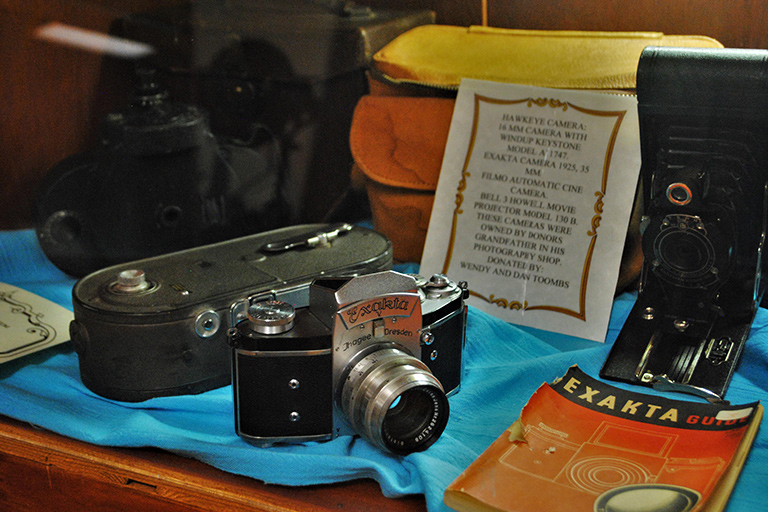 Welcome to part two of the Eastern New Mexico University Museums experience! Last time we looked at the Dr. Antonio "Tony" Gennaro Natural History Museum and the Miles Mineral Museum. I talked a lot about things I have zero authority on lecturing about, and I'm going to do it again today!

The second museum I visited was the Roosevelt County Historical Museum. That's the one just outside the Administration Building and the Student Academic Services Building. 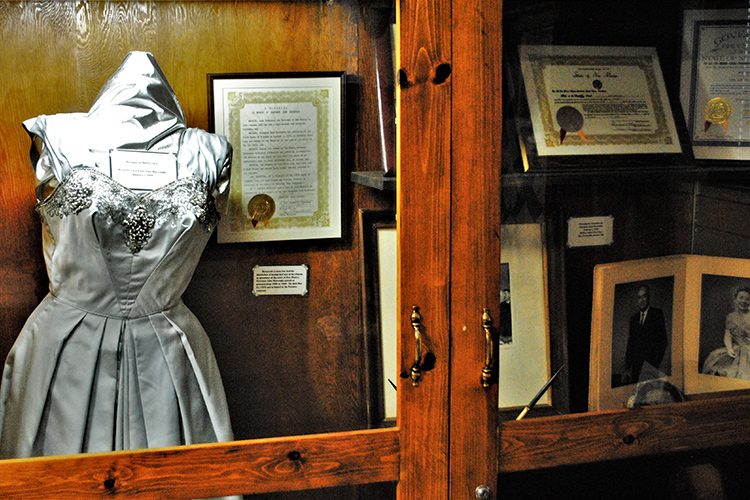 This photo is pretty cool. It's an exhibit of former New Mexico Governor John Burroughs (served 1959-1961), who was a resident of Portales. The dress is the one that his wife wore to his inauguration. You can see a photo of her in the far right. The rest of the cabinet contains objects that hold direct correlation to Burroughs, who passed away in 1978. 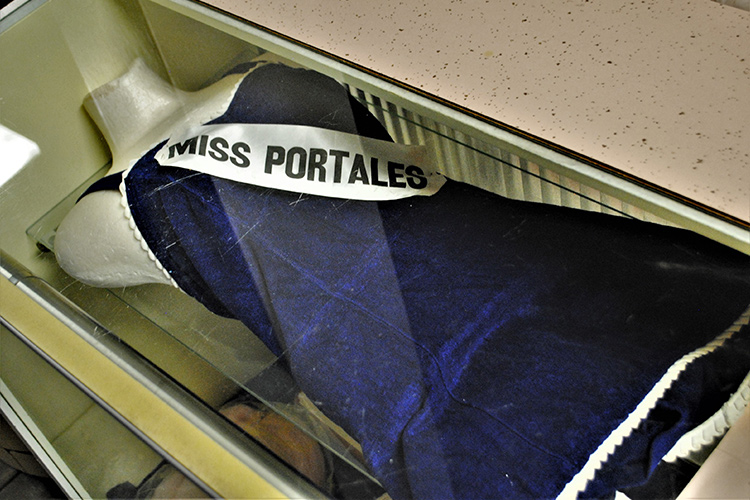 This is a dress used in the first ever Miss Portales competition. I don't know when it was first held because I'm bad at reading the exhibit description cards always, but it's a little strange to see an old dress with such a short hem. There were a few photos and newspaper clippings, and I remember thinking, "That's short even by today's standards where people care much less about what others wear."

I like this one. It's so cool. As you can see, it's a U.S. flag with only 47 stars—when there were only 47 states of the union. New Mexico became an official state in January of 1912, immediately followed by Arizona in February of 1912. Hawaii and Alaska were only inducted into the union in the decade following World War II (of which the museum has some interesting memorabilia that you'll have to look at yourself!), which means this flag is decently unique and rare. 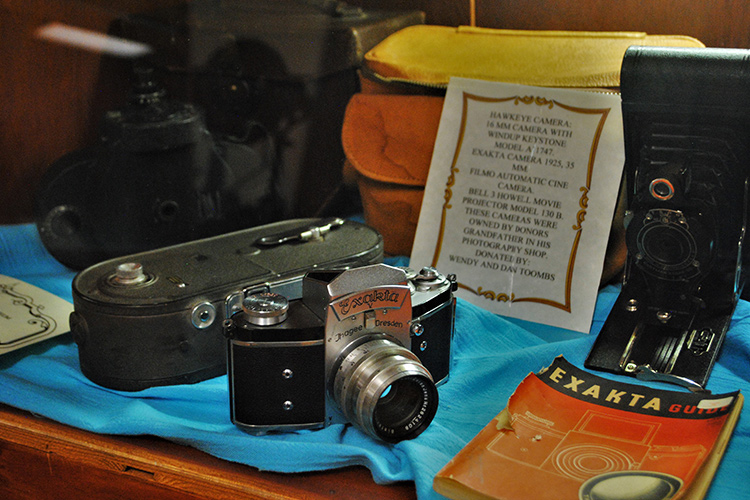 I'm a big old camera nerd. Straight up. My first "exposure" (haha, photography jokes) to the craft was in high school when my "Photo 1" class was required to buy pre-2000's film cameras. They're like normal cameras except instead of just porting the photos from an SD card to the computer; you had to put strips of special photography paper into certain chemicals to develop the photos, then go back afterward and put those little images into actual pieces of paper. It's a huge process, and you can see one of the earlier models of that camera in the center. To the sides are older cameras that required even more effort, but still produced wonderful images. Go Google Ansel Adams if you want to see the final products. He captured a lot of famous images of multiple national parks and each and every single one is absolutely STUNNING.

This is a World War I-era Portales Fire Department helmet. Look how old! It's probably tin, but what do I know about these things? Nothing! It just looks cool. So vintage. That must have been a problem during actual fires. I bet those things heat up very easily.

I can guarantee 100 percent that that is a horseshoe in a preserved log of wood. Truly, whoa. I don't need to say much else, do I? This one speaks for itself.

When I was a kid, my mom tried her best to prevent me and my older brother from knowing what guns were. Can you blame her? We were like two or three. One day, she looked outside to find we were mimicking guns with our hands, making blasting noises and "dying." She was shocked. We found out about guns and immediately thought "AWESOME," despite her best efforts to prevent it. This was an era when computers were large and boxy, Google was in its baby stages and my siblings and I had to ask "May I please play Disney games online for twenty minutes" for the very slight possibility of my mother saying yes. What I'm trying to say is I have no recollection of this event, and I was too young to be near anything that could have told me what a gun was, yet I decided guns were cool anyway. I still think that and looking at the museum's collection of weapons has done nothing to devolve my opinion. These snub-nosed revolvers were made for concealment and efficiency. Scary weapons. 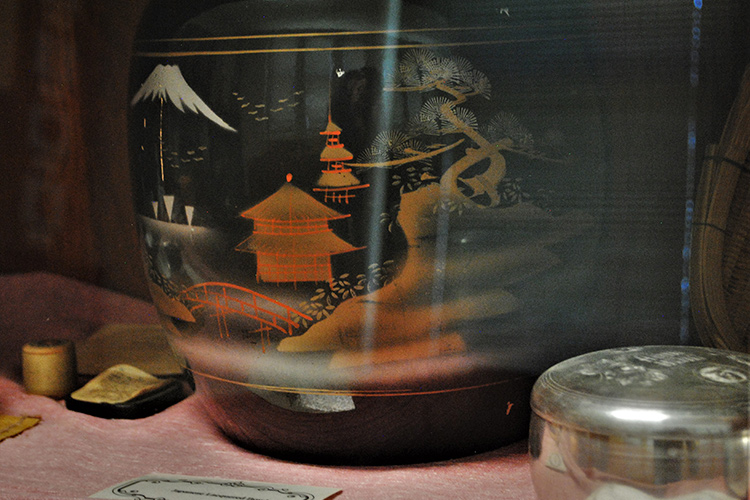 I love the way this pot looks. It's Japanese in origin, and the brush strokes are just so exquisite. In the background you can see Mt. Fuji, even though you can't actually see the outline of the mountain itself. And look at the architecture in the painting! It's so cool. I can't speak about why it's in a museum in Portales, because again, I go to museums to look at things and infer rather than taking five minutes to actually read what the exhibit is. I got a technique, don't judge me.

My boyish interest in weapons is not exclusive to guns. Although the lighting is dim, you can clearly see artillery shells and pieces of grenades, as the sign says, from World War I. In the bottom corner is an iron cross. No, it's not religious, nor is it a weapon—it's an old currency from an African country. Imagining carrying around a wallet for that. On the other side of this exhibit is a display on World War II memorabilia that I think is far more interesting, but due to the offensive imagery of the artifacts, you'll have to look at it yourself in person.

Regardless, I enjoyed this museum. There's a lot of interesting stuff I wasn't able to cover, so please go check it out for yourself. The museum's hours of operation are:

The museum's weekend hours vary during the summer months.

Anyway, don't let your experience stop here! Go check out the museum and check back later for the final article on the Blackwater Draw Museum and National Landmark.