A Trip to the ENMU-seums: Blackwater Draw Museum and National Landmark 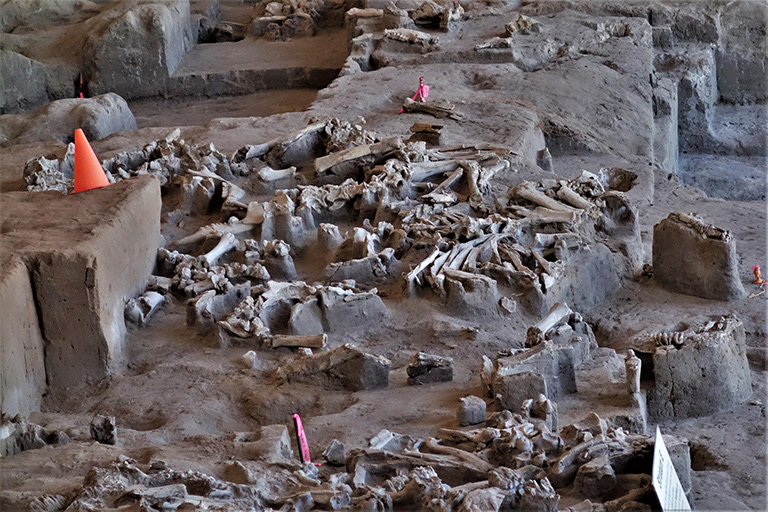 Welcome to the final part of my Portales museums experiences! It's been a wild ride, hasn't it? We've looked at animals, rocks, things that used to belong to people….

And really, that brings any of you new readers up to speed. Also, what are you doing in the final part? Go look at the other two articles: part one and part two! Of course, it's not chronological. Take your time. Do your thing.

Anyway, the final museum I looked at was the Blackwater Draw Museum and National Landmark. That's the museum that shares a space with the Post Office and is FREE to students. The landmark itself is located just outside Portales and is only about a fifteen-minute drive from the University.

The Blackwater Draw is an important archaeological site. Since its discovery in 1929, evidence of civilizations and pre-human animals have been dug up. It is possible to see these bones, arrowheads and other various artifacts and creatures in the museum and landmark, so let's just get into it! 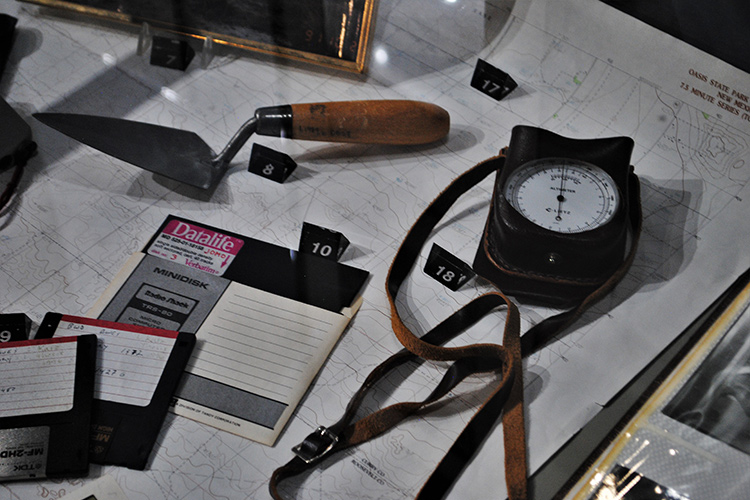 This first image is a capture of some equipment used by archaeologists. For the younger audience, those things in the bottom left are floppy disks, and they're ancient even by my legal adult standards. They're the predecessor of hard drives. These disks, trowel and compass are resting on a map of the area. 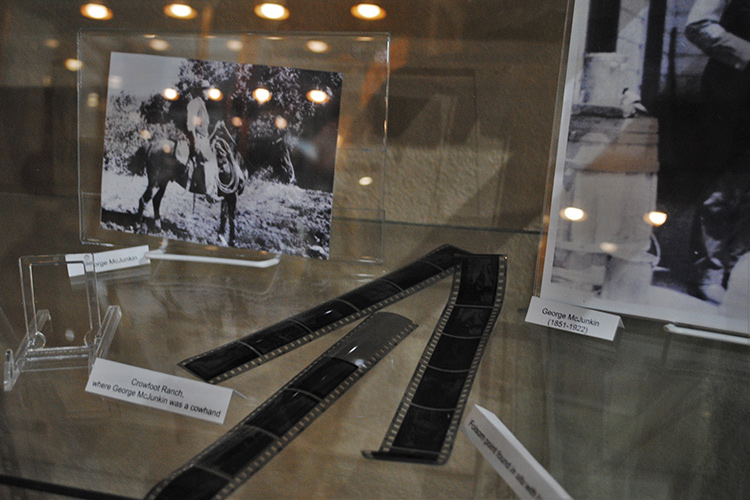 In my previous museum blog, I talked about camera film. You can see strips of developed film here as well as old photo prints of a guy named George McJunkin. I don't know who that is because, again, I'm not good at reading things in museums. 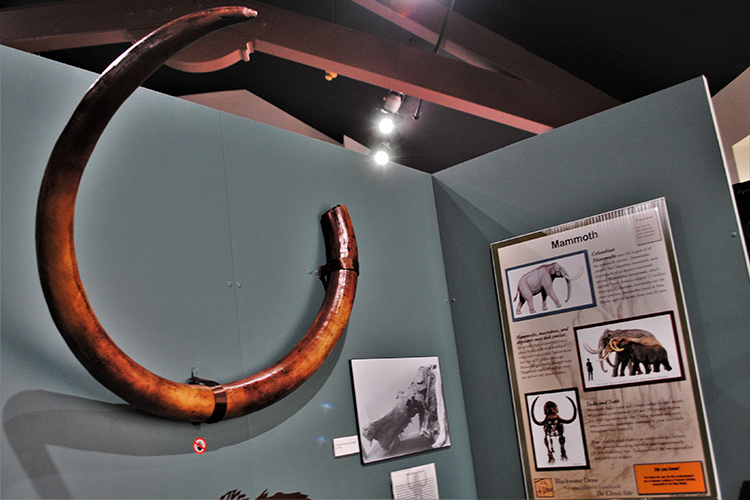 You can probably piece this one together. It's a mammoth exhibit with a tusk on the wall. Pretty neat stuff. 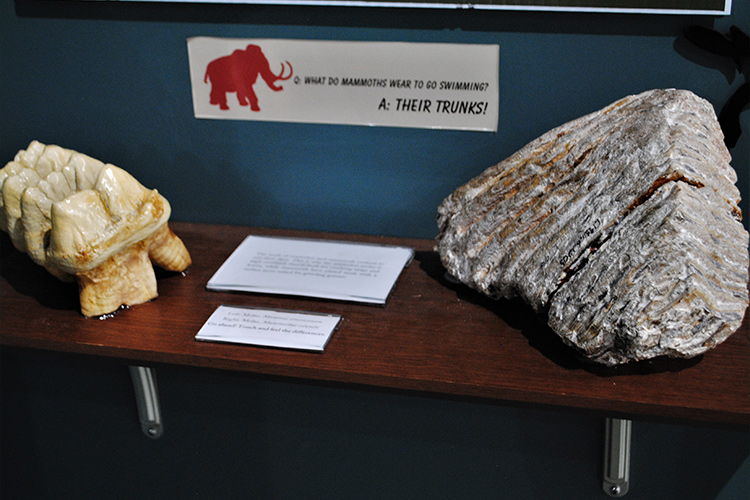 These are the teeth of two separate species of mammoth! Each tooth is bigger than my hand. For comparisons' sake, I'm a decently big dude—about six foot two or something like that. Genetics have given me monstrously large hands and to reiterate, each tooth is bigger than my literal hand. At first, I was confused because I was thinking in human terms: mammoths had a full set of teeth in their mouths, and they're THIS BIG? Someone must have lied to me about the size of mammoths. A quick Google search revealed no one lied to me, which is great, you know? Jokes aside, mammoths only had eight teeth in the entirety of their lives with four max in their mouths at any given time, which makes much more sense for the teeth. Two other notes: at first I thought that tooth was a rock because my mom has a rock that looks exactly like the tooth on the right sitting in her fish tank, so Mom—go double check that; secondly, can we take a minute to appreciate that joke in the back? 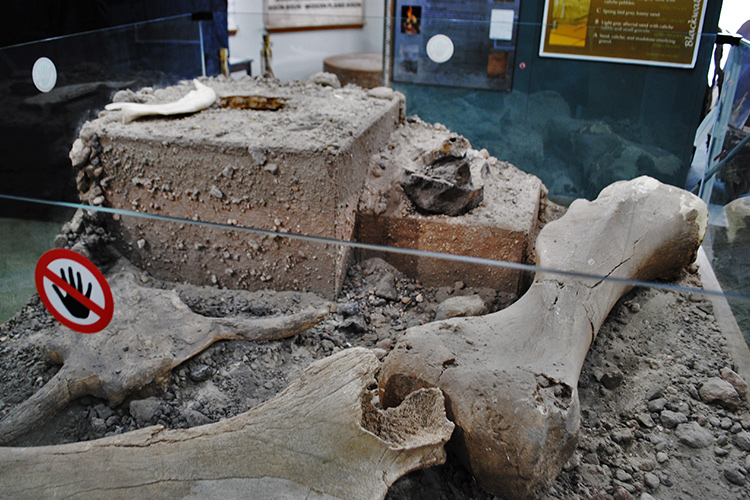 This is a replica of what the excavation site looks like. That's all it is. It's just very aesthetic, isn't it?

Here's a panoramic of the Blackwater Draw. It does not look like eastern New Mexico in any capacity, and I love it. As a city boy from Albuquerque, I'm used to a lot of terrain. On the west side of Albuquerque, you can see where the valley dips into the Rio Grande before it rises into the Sandia Mountain Range. While this is nowhere near that scale, it was a very welcome change for me personally. In the center, you can faintly see a white building—that's where most of the digging occurred. 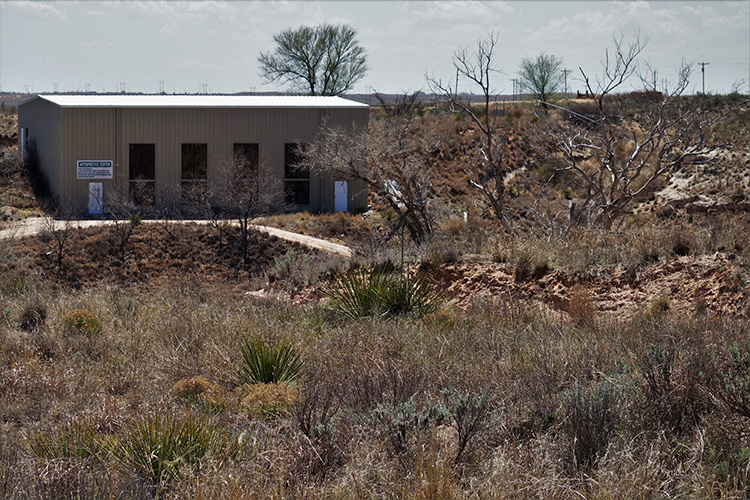 This is a closer look at the building on the mile-long round trail that leads to it. There's a short way to go and a long way to go. As a self-proclaimed outdoorsman, I took the long road. By the way, if you decide to go on the trail, bring plenty of water, clothes to keep you cool and a hat. I made the mistake of doing none of that, and I suffered from light dehydration and some light heat exhaustion. Don't be a Dillon, folks. Visit the site prepared. 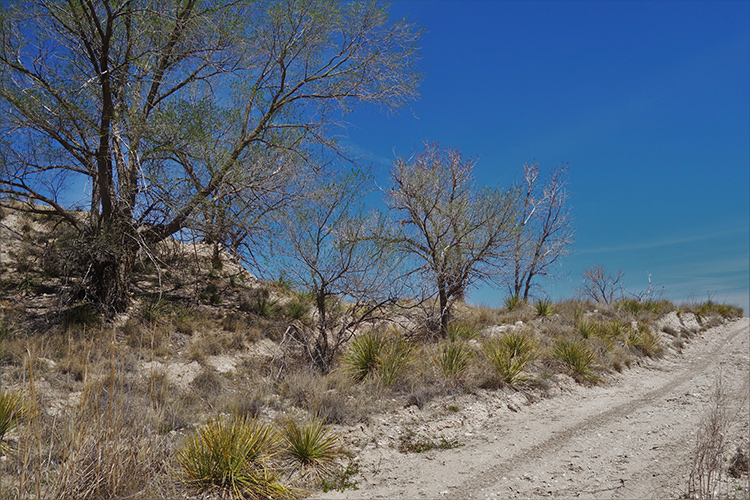 Another pretty photo of the trail about fifty feet away from where I took the photo prior. Nothing super-duper special other than being gorgeous. 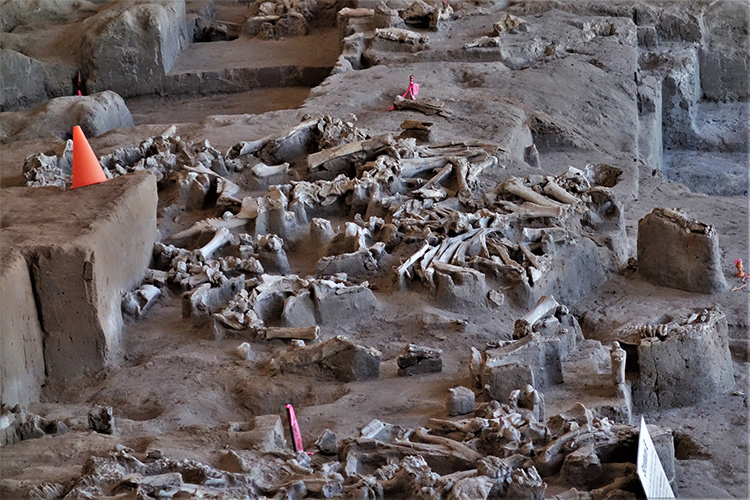 I reached the site about ten minutes after the previous photo. Not a super long walk. The interior of the building has some stairs and a walkway through the layers of the ground, although this is not open to the public. ENMU science students come out to the site to study and learn on occasion, which is why these paths exist. Also, I am still struggling to decide if those are actual bones or if they were planted there so the real bones could be studied in a lab or what have you. I mean, there are so many that it would make more sense to leave them there, but at the same time, they don't look real! I guess that's what happens when you're buried in the dirt for ten thousand years. 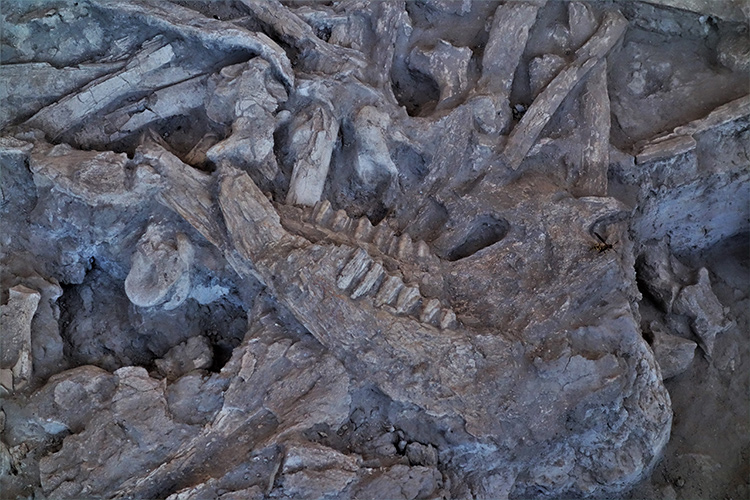 As far as I can tell, this one is a lower jaw bone of some sort of animal. Uh, yeah… I know science, as a digital filmmaking major. I don't know what the story is behind all the bones underneath it, but I'm immensely curious. Was it like a prehistoric elephant burial ground? Did a little lion-looking cub explore it to prove he could be king? Who's to say? Not me, that's for sure.

Anyway, that's as much space as I'm willing to occupy for now.

Speaking of space, be on the lookout for another blog about science in the future! Spoilers: I rant about space and how cool it is and how it works and stuff. It's so cool.

The Landmark is open seasonally April through May and September through October:

That's all that's left to say about the ENMU-seums! You guys like that title? I came up with it myself, and it's the peak of my existence. It all goes downhill from there, you know? I will never top that amount of cleverness with anything else, which is all probably untrue.

Thank you for reading all my dumb jokes and thoughts about things around Portales! Also, please go find these museums and give them your time and attention. They all go through a lot of maintenance for students. I guarantee that there's something for everyone throughout history, be it prehistoric or modern.